Share a memory
Obituary & Services
Tribute Wall
Read more about the life story of James T. and share your memory.

James (Jim) Thomas Riley, age 94, passed away November 17, 2022, peacefully at his home in Greenfields of Geneva of natural causes.

Born January 22, 1928 in Albion, Nebraska, to Edward Riley and Mary O’Keefe-Riley.  He was one of four children.  He grew up in Grand Island, Nebraska, where he attended St. Mary’s Cathedral High School. Jim excelled academically, as well as, on the basketball court.  He graduated in 1946 and entered the US Army, where he served overseas prior to attending The University of Nebraska College of Pharmacy.  He graduated in 1953.  Shortly after graduation, he married Florence Mary Wooters and had two sons, Michael and Timothy.

Jim began his career with Walgreens which brought them to the Chicago area.  Jim worked as a pharmacist and managed several stores of increasing volume and responsibility prior to making the choice to open his own pharmacy.  In 1967, he founded Riley Drug by purchasing Wayne Drug in Geneva, Illinois where he and Florence then settled and raised their family.  As Geneva grew, so did Jim’s involvement in the city.  He was very active in Geneva holding positions on the Planning and Parking Committee, First National Bank of Geneva Board and Chamber of Commerce.  He was proud to be a Wood Award Recipient in 1999.  He also served as a city Alderman.  As the community grew, so did Riley Drug.  Tim joined Jim at Riley Drug which later gave he and Florence an opportunity head south to Naples, Florida for a portion of the winters which they enjoyed for many years but looked forward to returning home to Geneva each spring.  After 54 years of marriage, Florence passed away in 2009.  Jim moved to Greenfields of Geneva where he lived until his death.

Jim was preceded in death by his parents, his 3 siblings, Margaret Pruckler of Denver Colorado, Richard Riley of Arvada Colorado, Don Riley of Omaha Nebraska, and his wife Florence.

Funeral Prayers for Jim will be held Saturday, November 26 at 9:30 am at Malone Funeral Home, proceeding to St. Peter Catholic Church, 1891 Kaneville Road, Geneva for Celebration of Funeral Mass at 10:30 am with Father Jonathan Bakkelund Celebrant. https://www.youtube.com/watch?v=jdq_V_6f7IY

Graveside service will follow at Oak Hill Cemetery in Geneva.

In lieu of flowers, memorial contributions may be made to St. Peter Catholic Church, 1891 Kaneville Road, Geneva, Illinois 60134.

Video is available for this event 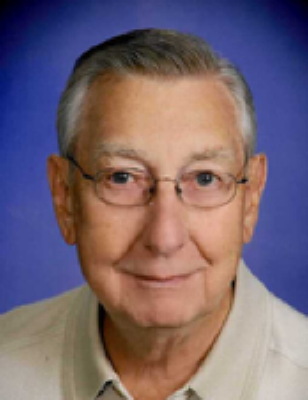